OF THE RESIDENTS OF THE

AND OF PERSONS MORE OR LESS CLOSELY ASSOCIATED WITH THAT PLACE

AND CONTINUED BY MEMBERS OF THE SALMON FAMILY

EDITION OF ONE HUNDRED COPIES

The Salmon Records are a private register of marriages and deaths of residents of the Town of Southold, Suffolk County, New York, or of persons more or less closely associated with that place.

The lists extend from 1696 to 1811, and were commenced by William Salmon of Southold, a son of John and Sarah (Barnes) Salmon of said town, and a grandson of William Salmon, who was born in England in 1610, whence he emigrated in 1635, and settled soon afterwards at Hashamomack in Southold, where he married, for his first wife, Katherine, widow of Matthew Sunderland, and, for his second wife, Sarah, widow or daughter of Caleb Curtis.

The manuscript was presented by the late Gideon Salmon to the late Rev. Jonathan Huntting, from whom it descended to his youngest son, Henry Huntting, Esq., the first treasurer of the Southold Savings Bank, who presented it to Nathaniel Hubbard Cleveland of Southold. From the latter it, together with an incomplete copy and an index made in 1860 by Joseph H. Petty, has recently come into the possession of the New York Genealogical and Biographical Society through purchase.

Several copies of these records are said to be in existence. One, in particular, known to have been made by the said Henry Huntting, Esq., himself, is described by the late Stuart Tuthill Terry of Southold, as “a beautiful and exact copy,” from which he made his copy in 1869. But this Huntting copy is not complete, the marriages ending with the entry of October 16, 1746. It is probably the one recently acquired by the New York Genealogical and Biographical Society.

The Terry copy is complete, the marriages between October 16, 1746, and November 25, 1762, having been copied direct from the original, although the spelling was not followed, and those subsequent to the latter date having been copied from the copy made by said Joseph H. Petty, which was said to be “very exact, showing every blot, erasure, and mark.”2)Stuart Tuthill Terry The Terry copy is now in the library of the Long Island Historical Society of New York, which Society has also another copy made a few years ago by the late Robert B. Miller, which is alphabetically arranged and taken partly from the original manuscript and partly from the portion of the records printed in the Suffolk county newspapers. Between June 27, 1879, and October 2, 1881, the Long Island Traveller printed the marriages through the letter “P;” and, beginning in January, 1882, the Suffolk Weekly Times took up the publication where the Traveller had left off. The list, however, seems never to have been completed.

The Salmon Records are a mine of genealogical wealth, and was, doubtlessly, used by Moore in his compilation of Indexes of Southold.3)Personal Index Prior to 1698, and Index of 1698, by Charles B. Moore, 1868, p. 115. The manuscript appears originally to have consisted of two separate registers, one of deaths, containing a few marriages, and the other of marriages. The pages of each register were originally only partly numbered. In, or sometime prior to 1860, these two registers were bound together into one volume of duodecimo size. The original part of the manuscript comprises 91 sheets of paper, or 182 pages, varying in size from 6×3 3/4 inches to 6 1/2 x 4 inches. Apparently about the time of rebinding in or before 1860, the pages were renumbered consecutively throughout in carmine ink, and this is the paging which has been followed in the copy now printed. The original numbering of the pages in the record of deaths commenced with the record proper, or with page numbered 3 in carmine ink.

Originally, at the foot of each page, was written the number of entries on the page. Some of these numbers have disappeared, lost through wear and tear. The number is given in the copy printed wherever it remains in the original or appears in said manuscript copy.

Age has made the paper dark and very brittle, and caused the ink to fade; while the margins of the pages containing the earliest entries are so worn, that many of the records are now either missing or illegible. These places are indicated by a dot or dots, thus: ……; or, whenever possible, are supplied from the said manuscript copy within brackets, thus: [ ]. A line thus, — , in the dating means that the date was omitted and the space left blank in the original.

The dates have been transposed, being placed first in the copy now printed instead of last, as in the greater part of the manuscript. With this exception and the omission of a few entries which have been struck or crossed out, no change is made from the original. 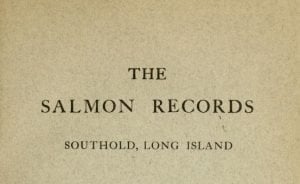 
Source: William Salmon, William A. Robbins, editor, The Salmon records: a private register of marriages and deaths of the residents of the town of Southold, Suffolk County, N.Y., and of persons more or less closely associated with that place : 1696-1811 (New York: New York Genealogical and Biographical Society, 1918).

The free PDF is 5.6 megabytes and is is a complete copy of the manuscript.

2 thoughts on “THE SALMON RECORDS”

This site uses Akismet to reduce spam. Learn how your comment data is processed.